I’m a big fan of Cal Newport’s Study Hack’s blog, and have made several attempts at adopting a number of his practices, like daily shutdown rituals, weekly planning and time blocking. I’ve had varying degrees of success implementing these rituals. However none of them — over the long term — have become a habit that has stuck.

This post is will focus on a fresh attempt at integrating time blocking into my daily work routine, with a few tweaks that I hope will overcome the problems I’ve had in the past. I’m not going to explain what time blocking is… head on over to Cal Newport’s original post Deep Habits: The Importance of Planning Every Minute of Your Work Day, and Time Blocking — The Secret Weapon to Better Focus for those details.

The Benefits of Time Blocking

When I don’t take the time to plan, I feel overwhelmed with the number of things on my plate; as if I should be doing everything right now. However when I plan, and in particular use time blocking, even though there may be a million and one things to do, I feel some level of control. I feel calm. I know what needs focus at any given time. Everything else will be dealt with later in it’s own scheduled time.

Cal Newport make a pretty strong argument as to the benefits of time blocking:

Sometimes people ask why I bother with such a detailed level of planning. My answer is simple: it generates a massive amount of productivity. A 40 hour time-blocked work week, I estimate, produces the same amount of output as a 60+ hour work week pursued without structure.

I have to agree. When I’m in the habit of planning and time blocking, not being reactionary and jumping from one thing to the next, I get a lot more done. I have more focus on what I’m working on. I don’t feel like the need to hurry. I utilise the time that I’ve allocated to task, safe in the knowledge that time is allocated to those other tasks later.

Problems I’ve had with Time Blocking

As I already mentioned, I’ve had a few stabs at time blocking in the past. There are long stretches notebooks of mine with page after page of time blocked days. Some days are more detailed than others. And there are periods, usually a number of days at a time, when I’ve clearly forgotten and then picked it up again days later.

Below is an example of a day I time blocked last year: 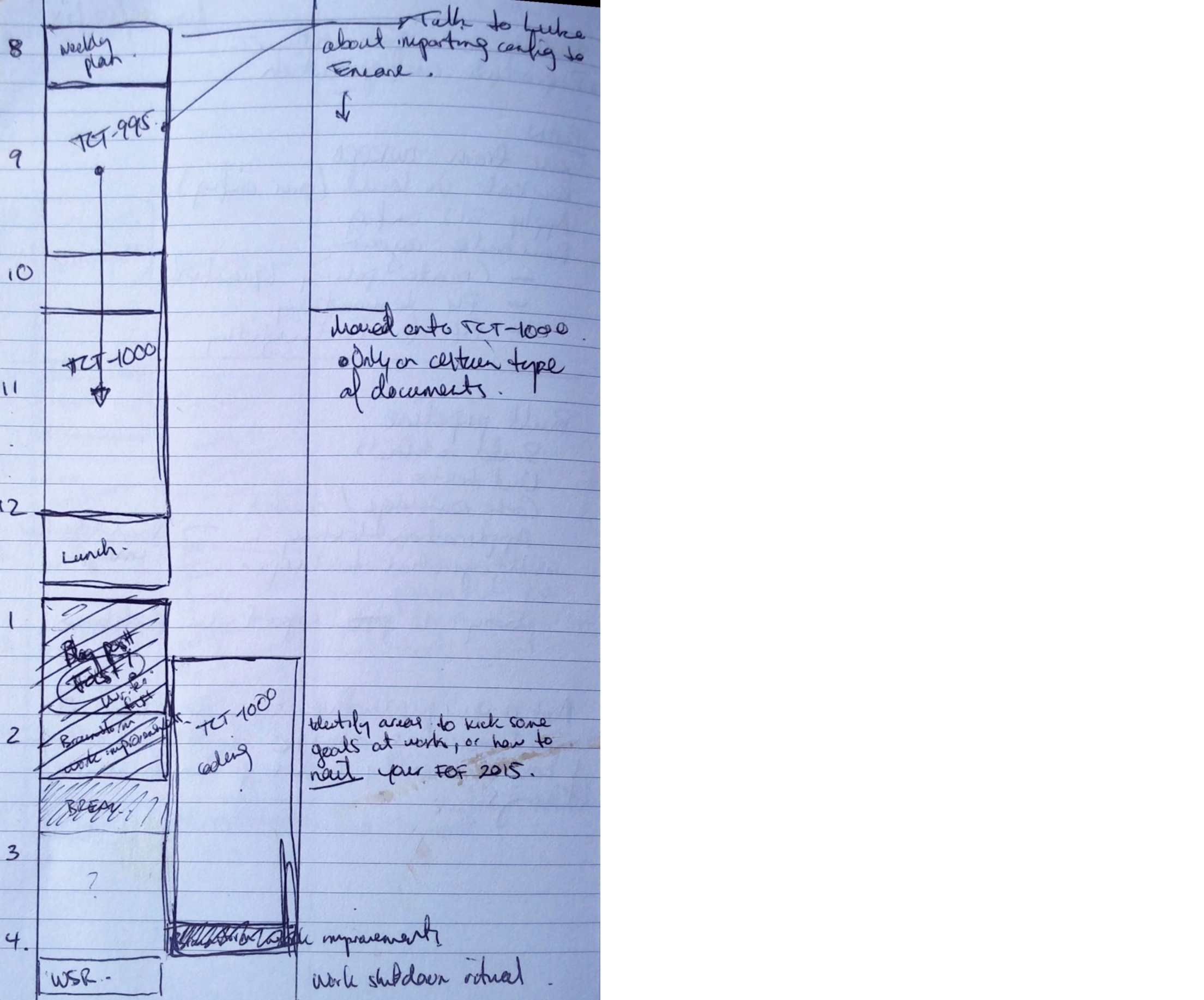 One of the main problems with my previous attempts is the pen and paper approach. I find switching between a notebook and the keyboard cumbersome, and it creates the need to copy my handwritten notes to digital format later. As a developer, I’m an advocate and practicer of the DRY Principle. Copying hand-written notes for archiving is a pain. And with hand-written time blocking and notes, there’s no hope of extracting any useful information (analytics) at some point in the future.

Now that I work remotely, I spend 95% of my time at the computer at a small, wall mounted flip out desk (taking minimalism the the extreme). I don’t have room for a notebook as well as my laptop, so I make use of Google Docs and Keep for logs, notes and scratchpads. And generally I don’t carry around a notebook with me 100% of the time, so when I forget (which is often) I’m up s*** creek.

What I want in a time blocking solutions is:

With that in mind, I thought I’d have yet another stab at time blocking. I decided to create two new calendars in Google Calendar, one called Planned and the other, Revised.

The Planned calendar is for scheduled time blocks. I map these out in a planning session either the day before or in the morning. Once I’ve blocked out my periods of work, they stay fixed. This calendar becomes a record of what I scheduled in for the day. The Revised calendar is where I put calendar events for what actually happened and for items that needed rescheduling. In the image below, the Planned items are the ones on the right, in light green. The Revised events (what actually happened) are in dark green. 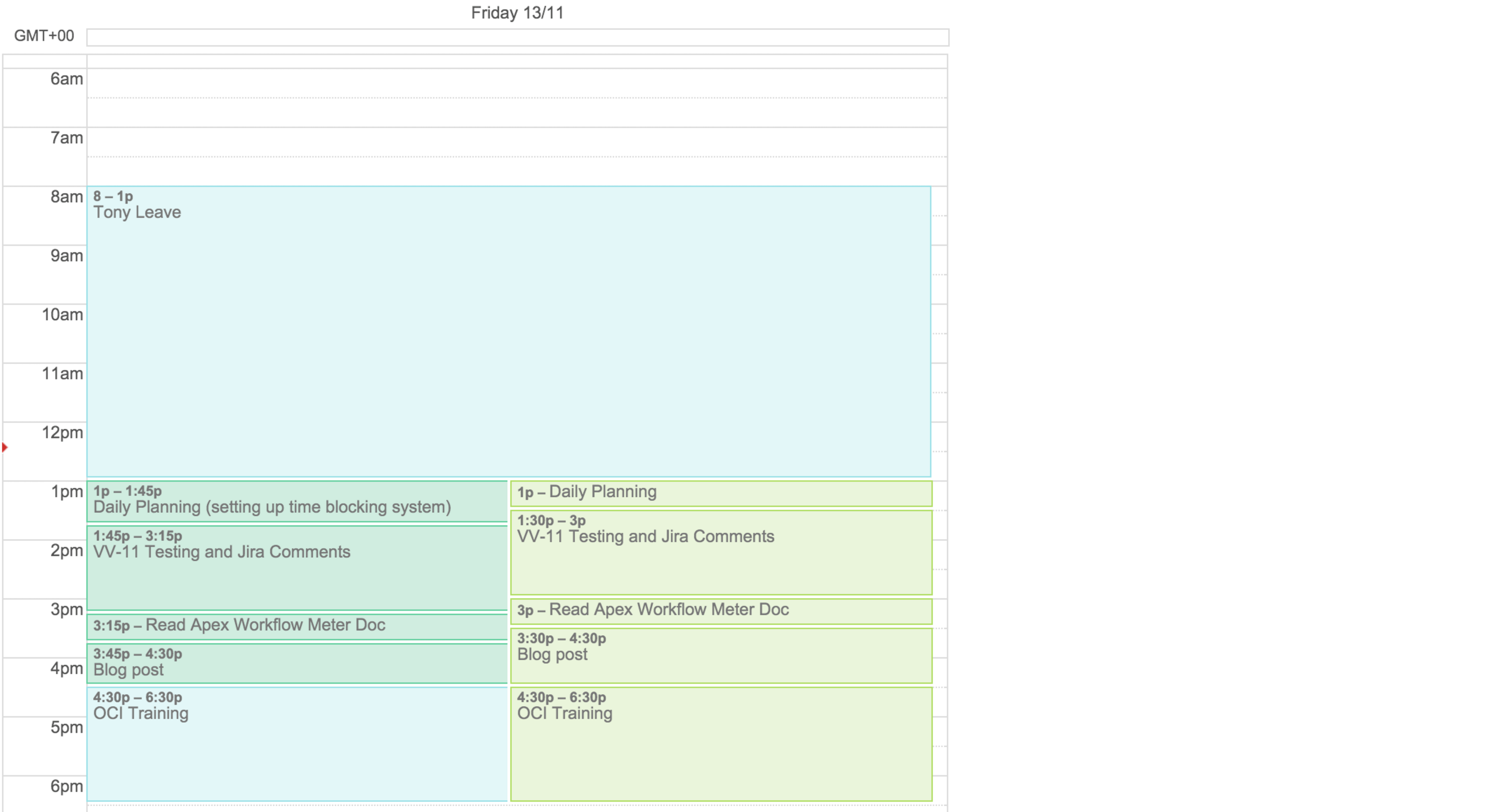 At a glance in either Day or Week view in Google Calendar I can see what I’ve got coming up, or, if I’m looking backwards, what actually happened. I get the added benefit of being notified when a time block is due to end in the form a pop up when a new time block is about to start.

So far this approach has worked well, and it ticks off most of my initial requirements in a time blocking system. Admittedly, creating events in either calendar is a bit more work than simply drawing a box on a piece of paper (I have to set the privacy and availability for each event). But hopefully with time that will get quicker as I refine the process.