Each month I go back over the notes in my bullet journal and pull out anything of significance: notes, quotes, patterns, lessons, achievements, things that have gone well and those that haven’t. I take what I learn and feed into the next month. It’s a ritual of continuous improvement, a cadence of accountability, that has served me well. In 2020 I’m experimenting with publishing my reflection notes. Here’s what happened in January.

There’s a distinct lack of direction/clarity in my life at the moment. January was the eighth month of my sabbatical, and as I start to look toward entering paid work again I’m coming up empty. Some days are better than others, but I often wonder whether taking a year out was such a great idea after all. Hopefully my thought patterns on those days won’t be prove to be right.

My monthly finance process takes too long. Each month I finish categorising my transactions, adding investment returns, doing my business bookkeeping, and trying to make sense of it all. The last couple of times I’ve done this it has taken 3-4 hours, which is 2-3 hours than I’d like. This needs to be streamlined.

Not enough planning. I guess this ties in with a lack of clarity, but I find I’m leaving the decision of what to do at any given time until it’s time start. By then it’s too late, and my lizard brain is more likely to opt for something easy and unproductive. To get more out of each day — e.g. more reading, writing and coding — I need to get better at planning my days, weeks and months.

Relationships are hard. You have to work at them. You have to compromise. You have to look hard at yourself and be prepared to make changes. Stoic philosophy, and books such as The Daily Stoic, have helped immeasurably in this regard. They force me to look internally and remind me of what is in my control, what is not, how to better perceive what is going on around me, and how to act in response.

I should (re-)learn to be happier in my own company. I used to do loads by myself. I’d think nothing of travelling for months on my own. But over dinner with an ex-colleague, who told me how he loves to get away by himself, I realised I’d lost some confidence here. I guess you get used to being with a partner and kids and travelling with friends. Still, I want some of that confidence back.

If in doubt, get rid of it and see what happens. In my bullet journal in 2019 I kept a food log and recorded the times I woke up and went to bed each day. The food log was useful when I was trying to understand how much junk I was putting away, but I never used the wake up and sleep times for any sort of behaviour change. But still I feared I might miss some valuable information if I ditched those trackers. But in January I decided to remove them anyway, and guess what? You guessed it… I didn’t even notice they were gone.

Kids just want to be understood. Adults too. Take the time to try and understand why they’re acting the way they are.

One thing at a time, to completion. I’m often guilty of trying to spin too many plates at once. But I’m far happier when I focus on one thing and do a good job of it all the way through to completion.

Remember to take my own reading light on a plane. When the cabin is totally dark and people are sleeping, the built in reading light is way too bright. I would have hated me if I was trying to sleep next to that strobe beaming down from above.

I don’t like masala. I never know what to get when I go for a curry. I never remember what I had last time either, or what it tasted like. Now I can scratch masala off the list.

On the health and exercise front, in 2020 I’m continuing with my “one thing every day” routine. I’ve extended my rotation to include a lift (shoulder) day after reading Disipline Equals Freedom by Jocko Willink. My rotation is now push, pull, lift, squat, run and yoga. After a slow start to the year I hit my straps in the middle of the month. I did 25 days of exercise, finishing the month with 16 consecutive days.

I embedded cold showers as part of my morning routine, finishing January with 11/12 days started with a cold shower. I love these… so good.

Range, by David Epstein. A great book recommended in Ryan Holiday’s 20 Books to Help You Live Better in 2020. Turns the common ‘specialisation wins’ argument on its head. Epstein argues that experimentation in a range of different areas, only going deep (specialising) when you discover something you really enjoy, trumps the well-held specialisation (10,000 hour rule) belief. I took a lot out of this one.

Accelerate, by Nicole Forsgren, Jez Humble and Gene Kim. Presents research on how high performing software development and delivery practices contribute to the success of a company. I read it to get the DevOps perspective. But I thought the authors spent way too long explaining how they did their research and trying to justifying it.

Steal Like an Artist, by Austin Kleon. Loved this book. Short but full of great advice on how to be creative and produce great work. 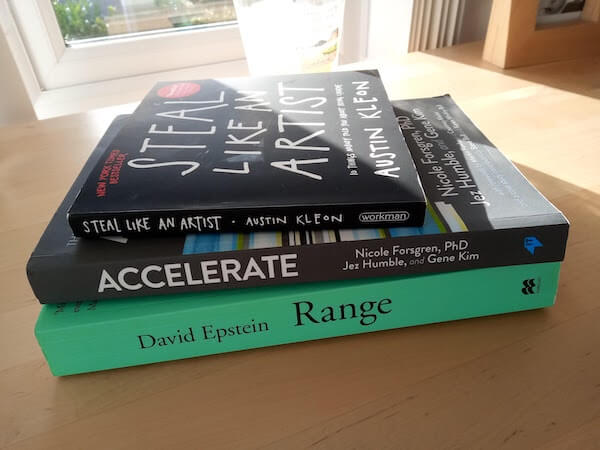 As for writing, I’m a bit disappointed because I only wrote one blog post: 2019-reflections-health. I’m still planning on closing out my 2019 reflection posts… hopefully before we hit 2021.

In terms of coding, I pushed out a feature a client requested to track estate agent referrals. In my opinion it was a reasonably clean and extensible implementation in which I stored the configuration for new fields in JSON in the database. I foresee more estate agent referrals so I’ll only have to update the configuration in order to satisfy those new requirements; no additional coding. I also created a new Terraform module to deploy the (Docker) service image using AWS Fargate instead of EC2 instance backed ECS. And finally I plumbed in Redis as a persistent session store, and started using AWS Cloud Map and Service Discovery for Fargate containers to be able to talk to each other. These seem like really simple, straightforward services to use.

I put a lot of new notes in expanding commonplace book, but the quotes below I found in my bullet journal:

“When you’re focused on the process, you’re less worried about externals. This is where tranquility comes from.” — Steal Like an Artist

“Trying things is the answer to finding your talent.” — Range

I booked a flight back to Australia in August (it will be the third trip home in 14 months). In 1998, 1999 and 2000 I played in three premierships for the Queanbeyan Tigers in the AFL Canberra (then ACTAFL) competition. Because I was overseas I missed all three ten-year reunions and the first two twenty-year reunions. I couldn’t miss my last opportunity; Some of the guys in the team might not make it to the thirty year reunions!

In January I also saw Book of Mormon for the second time, this time in Bristol. It was just as good the second time around. If you ever get a chance to go, do so, you won’t regret it.