This post started out with the title How a Book Saved Me £50,000. Part way through writing it, however, I realised it was a specific example of a more general, more valuable concept: how we can improve ourselves and our lives by applying the knowledge — the wisdom — that others have worked hard to acquire.

Employ your time in improving yourself by other men’s writings, so that you should gain easily what others have laboured hard for. — Socrates

I wish I’d read Early Retirement Extreme (ERE) 9 years ago when I first added it to my reading list. Had I done so I might well be financially independent already. I’m glad I read it when I did, though, because in doing so I avoided ploughing myself into another £50,000 of debt, and years of work required to pay it off. It was a close call though. I had my finger on the button. I was hours away from picking up the phone, firstly to try and negotiate the quote we’d been given, but ultimately to give the go ahead.

As fate would have it I had also started reading ERE in the days prior. On page 4 I underlined a sentence, "…with tens of thousands being spent on marginal increases in functionality." The note was marked with an asterix, and at the bottom of the page I wrote some marginalia: Currently pondering a £50,000 extension and garage conversion. In the days and pages that followed my outlook was completely transformed. 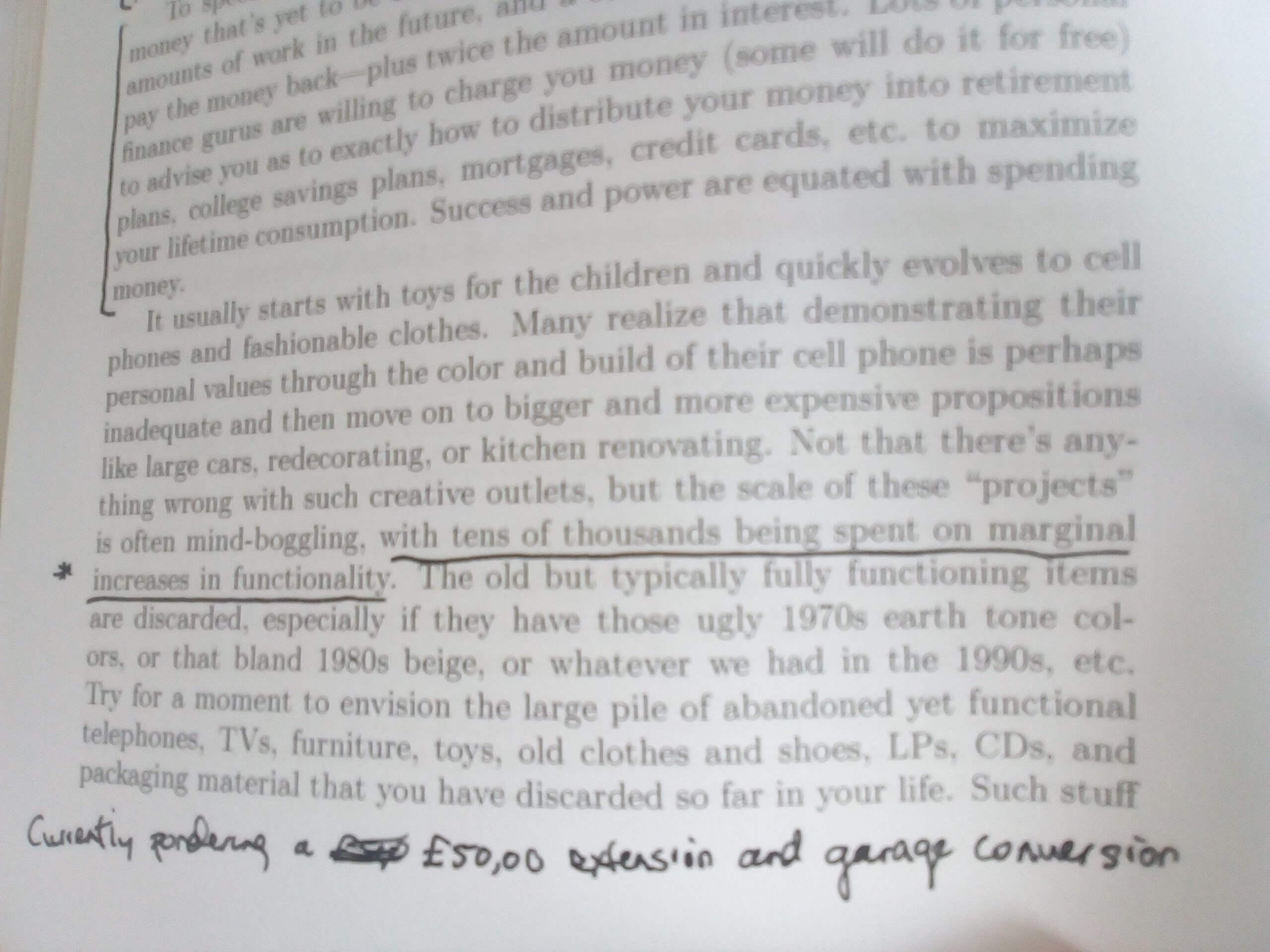 I’m not criticising extensions or spending money to improve one’s living situation. I’m merely pointing out that on this occasion, with some help of someone else’s hard-earned wisdom, I realised I was about to make a huge mistake. Had I really thought this through? Was a few extra square metres of open plan kitchen and a slightly bigger garage a reasonable trade-off for several more years of 9-5, of my finite time? It was a marginal increase in space (functionality) I was going to spend tens of thousands on. Suddenly it didn’t seem like such a great deal.

In the days that followed I journaled on the matter, realising that we almost never evaluate the true cost of something before we acquire it, and we almost always overestimate the value it will bring to our lives.

Suffice to say I never made that call.

Early Retirement Extreme turned out to be somewhat of a quake book for me, one that I will read and reference often. The paragraph below is one of tens, if not hundreds, that resonated with me and have changed the course of my life (emphasis is mine, particularly relevant to me at the current juncture of my life).

Do you dream of doing instead of having things? Is your job getting in the way of doing what you want to do? Nobody lives forever and sooner or later people realize that their lifespan is finite and that someday you’re going to die. This revelation occurs retrospectively when people hit their forties and ponder what they’ve done with their life so far. It’s called a mid-life crisis. The question you need to answer is what you want to do with your life given that you don’t have time to do everything? Do you want to spend most of your life paying off the interest of a 30-year mortgage and working so you can fill increasingly bigger houses with increasingly more stuff while being stuck in your daily commute increasingly nicer cars? Or are you prepared to give up the stuff so you can do whatever you want, whenever, and wherever withing reason? What will your legacy be — what you owned ore who you were?